Covering 72 percent of the earth and supplying half its oxygen, the ocean is our planet’s life support system. With every breath we take, every drop we drink, we are all connected to the ocean. While most people never venture far beyond the coast, this is not the case for 31 year old Josh Lewis.

Born and raised in Port-of-Spain, Trinidad, Josh was always fascinated by the ocean.Whether it was boogie-boarding at Maracas beach, or journeying ‘Down The Islands’ on his father’s boat, there was always something about being in and around water that gave him a sense of fulfillment.

He recalls that the first time he wore a mask and snorkeled, he was totally mesmerised by the underwater world he was introduced to. The vibrant colours, the sounds, the fish, all the life below the water took his breath away and he was severely fascinated by it all, highlighting that the beauty of it lies in the details.

One of Josh’s life changing moments occurred when he was just 8 years old when he  accompanied his father and his friends on a spearfishing trip ‘Down the Islands’. They loved free-diving spearfishing, which is diving with only the essential equipment on a single breath and a speargun in hand to catch the targeted fish species. (This is the most sustainable type of fishing). After watching them from the boat, they pulled up to a spot against the cliff facing the southern side of the third boca (The Bocas del Dragon is the name of the series of straits separating the Gulf-of Paria from the Caribbean Sea. There are four Bocas from west to east and the 3rd Boca also called the Boca de Navíos separates Chacachacare from Huevos.) He begged his father to take him in the water that time and although his father was a bit hesitant, he allowed him to participate but insisted that he remained close as the area was very exposed. When the captain positioned the boat on the location, his excitement quickly turned to nervousness as he could not help but notice how dark and eerie the water looked.  His father found the perfect spot and ordered the captain to put the boat into neutral. For a brief moment fear ran through his body but as his father and friends jumped into the water, he soon followed. What happened next would forever define his love for diving. As the bubbles cleared, he saw his father pointing at something off in the distance, his eyes were still adjusting to the low light, then, seemingly out of nowhere a massive Manta Ray appeared! The wingspan was approximately 12 to 15 feet across. He watched in complete awe as the gentle giant gilded towards them, passing directly underneath them to then cruise off into the abyss. It’s a moment that will be forever etched into his memory.

His deep connection to the water led to his hobbies of surfing, free-dive spearfishing, diving and hiking. After completing his secondary school education at St Anthony’s College, he went on to Flemming College, Ontario Canada where he studied Resources Drilling and Blasting. This however, left a void in his heart as it was not his true passion, so he later transitioned to Diving and enrolled in a Commercial Dive Course at The Underwater Centre, Fort William, in Scotland.

Currently he works in Trinidad and Tobago as a freelance Diver. The work generally includes inspection, maintenance and repair on anything from offshore oil and gas installations, to civil work, to underwater jetty’s etc. He is also a consultant at Blue Waters Inn Tobago, showing Tobago’s glorious underwater corals and marine life to tourists, students and locals.

According to Josh- “As beautiful and majestic as the ocean is, it can also be a very dangerous and unpredictable place, demanding respect at all times. I’ve assisted in many rescues and have also had to be rescued myself. My passion for free dive spearfishing is one that runs deep. It’s taken me to many places that few have ever been and allowed me to see things that few will ever see. But above all, it’s the mind and body connection that you must establish when your underneath water surviving on one breath, while your body adapts to constantly changing surroundings as you listen closely to what your body is telling you, it’s one of greatest forms of surrender and flow truly creating the ultimate adventure.”

Some of the best diving memories he has had growing up were in the Gulf of Paria. The amount of marine life concentrated in one area always blew him away. There were large schools of carite, snook, snappers and big grouper which were always common sight.

Unfortunately now, the Gulf has become the most polluted body of water around Trinidad. Heavy metals from industry coupled with land-based pollution has taken a significant toll on marine life. On many occasions he has seen fish with deformities and parasites. Sadly, it is also unsafe to eat fish from the Gulf and the species are suffering. Shrimp Trawlers have also destroyed and continue to destroy what is left of an important spawning ground for a variety of fish species in the area. To add to the destruction, fishermen are setting dozens of gillnets every night, with no proper laws or regulations. It has become an absolute nightmare.

Josh recalls boating with some friends at night and within a short distance they counted 5 nets each over half a mile long, making it almost impossible to navigate without running over them. To him this was a real eye opener. Gillnets in his opinion are the most destructive and impractical fishing method. These nets kill without discrimination and produce the most bi-catch. (For more information on Gillnets check out the link https://www.fisheries.noaa.gov/national/bycatch/fishing-gear-gillnets)

He has heard on many occasions fishermen talk about thousands of pounds of fish being wasted because there was no market for the species caught. Furthermore, the nets are usually set overnight leaving the fish to rot for hours before it’s picked up and the fish put on ice. As a diver, he has also seen first-hand the impact that ghost nets (nets fishermen lose from strong tides or improper anchoring) have on marine life. These nets drift aimlessly sometimes for weeks covering large distances, killing turtles, dolphins, fish and sharks in their path until they inevitably become entangled on a reef. When this happens the entire reef and its inhabitants are doomed. Those that escape entanglement are forced to find new homes.

“ It’s truly a sad sight.. a once vibrant reef teeming with life turned into a barren wasteland of death and destruction.Life is a delicate balance of give and take, as an avid diver and ocean enthusiast it’s only natural to want to remove these nets when we come across them. The reality is though, that the sear size and weight can make removing them a dangerous undertaking and requires proper planning, equipment, and experienced divers. This makes it a little more difficult to get them off the reefs and out of the water.” says Josh.

Pollution of the world’s oceans is an increasing and pervasive problem, as reports show that approximately 12 million tonnes of plastic end up in the ocean every year.This is equivalent to emptying a rubbish truck into the ocean every minute. There is one particular type of plastic pollution that is especially deadly because it is specifically designed to catch and kill marine wildlife: the abandoned, lost or discarded fishing gear usually the gillnets. Although Josh and some friends have successfully removed a few nets in the past, he strongly believes that there is only one solution to this net crisis and that is to ban them completely.

Knowing he had to continue to be part of the solution, Josh founded 4ChangeTT which was inspired by a dream of a brighter, cleaner, healthier and happier T&T. The aim is simple; to inspire, support and encourage each other, to make choices and take actions that have a positive impact on one another and the environment. In the past the group has hosted prize giveaways encouraging individuals to take their own initiatives and give back to the environment. With an emphasis on fun and creativity, people were asked to post a picture expressing how their choices and actions supported sustainability and a cleaner T&T. It was truly incredible to see how people came together, cleaning beaches, neighbourhoods and expressing their unique perspectives on how they care for the environment.

“I believe that caring for the environment starts with caring for yourself, as your lifestyle choices subsequently reflect your thoughts and actions which made One Yoga TT and the Sweet Beet perfect sponsors for this mindfulness approach. I am truly grateful for their support and look forward to future partnerships.” remarked Josh.

Moving forward, the vision remains the same for Josh; to create awareness, and encourage us all to do our small part in making T&T and by extension the world a better place. His dream is to make 4ChangeTT a governing body that provides aid to animal shelters, forest restoration, wildlife rehabilitation programs, youth development and training programs, visual arts and educational events which can unite us nationally and deepen the connection to this beautiful island we call home.

He is currently on the right track to achieving his dream as he believes everything will unfold organically. For the young people of Trinidad and Tobago this is what Josh has to say to you.

“Your work is now more important than ever. Keep in your heart space and stay true to your vision. Follow your dreams! The environment is our home so spend more time outdoors, connect with nature, and keep a clean scene! We’re all in this together. Be the change you want to see!” 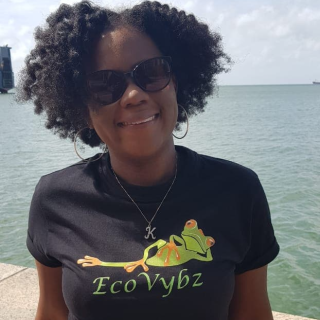 I am an enthusiastic environmentalist ready to be the change I want to see in this world.